This summer we took a trip to Canada and went to the north channel and the Benjamin islands. It was super fun and amazing, especially the Benjamins.  We met up with three other families: the Herbons on INNTW, the Zeefs on Livin the Dream, and the Wilsons on La Cigale.  The Herbons and Zeeffs are doing the Loop for the first time. 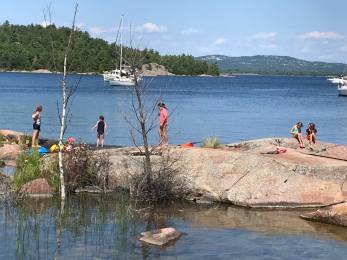 Now we are heading down to Florida and the boat will stay down in Florida for the winter.  We will be back and forth from the boat and home because dad would like to be home some for working and Maddy has orthodontic work being done.

It has been really chilly lately. We went to the AGLCA fall rendezvous and the boat stayed in Grafton, IL while we went to the fall AGLCA rendezvous.  We traveled from Grafton, IL to Green Turtle Bay in Kentucky with the Wilsons. Then the Wilsons got hung up in Green turtle waiting on parts.

We were at Aqua yacht harbor for Halloween. We trick or treated with INNTW and Livin the Dream.

I got to throw swords to a street performer.  It was a little bit scary but cool.  They didn’t look too sharp but they had a huge blade. 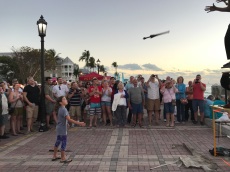 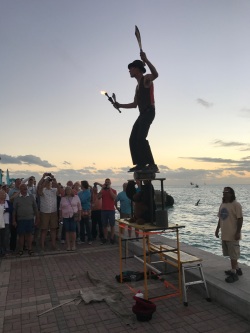 In Marathon we got to see the Wilsons again.  We swam almost every day with them. 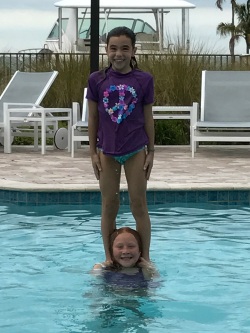 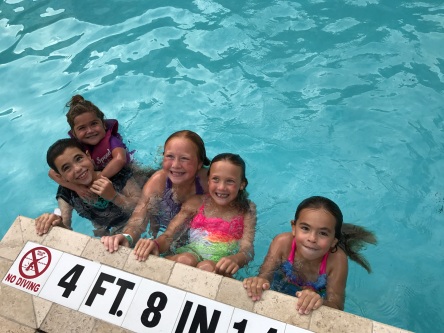 We also went to the Coast Guard station.  Here are three things that I learned there.  First, they have a rope that they throw so if a boat is trying to get away from them they throw the rope and it gets wound up in the boat’s props.  Second, there is a 45 foot boat that they don’t use that often and a 33 foot boat that they use most of the time.  Last, if one of the coast guard boats flips over it will flip itself back over because of the air tubes on the sides.  At the Coast Guard station I got to sit in the coxswain’s seat.  I learned that means captain.  I also got to try on a life vest.  It holds knives, whistles, flares, flashlights, an epirb, and a couple of other things.  It was very heavy. 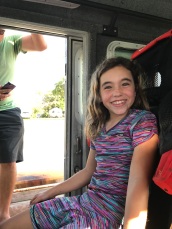 Also in Marathon we went to the Turtle Hospital.  It used to be a motel.  The people that work there that are on call 24/7 have two motel rooms to live in.  I learned a lot at the turtle hospital.  There are 7 different species of turtles.  Loggerhead turtles can get up to 400 pounds and 4 feet long.  They eat crab, lobster and shrimp.  Hawksbill turtles eat sponge.  Kemp’s Ridley turtles get up to 100 feet and 2 feet long which is not that big for a turtle.  Kemp’s Ridley turtles lay their eggs in the middle of the day, not at night when it’s all dark outside.   Green turtles can hold their breath for up to 5 hours.  Green turtles only hold their breath that long when they are resting.  They don’t actually sleep, they only rest because they have to remember to come up for a breath.  Other species can hold their breath for 5-45 minutes. I learned that leatherback turtles are named that because their shells are soft like leather.

The turtle hospital finds the turtles that need to be rescued because they tend to float to the top.  One reason they float to the top is that they eat a lot of trash out of the ocean causing infection and bubbles inside of them.  The people that work there give them vegetable oil, Beano and Gas X to help clear what is blocked.  Many of the turtles have growths almost like warts called FP tumors.  They can grow on the fins and the eyes.  The hospital removes them and then they have to stay for one year to make sure no tumors grow back.  If a boat hits a turtle and takes a piece of the shell out that piece will not grow back.  Also when a boat hits a turtle they can get a condition called “bubble butt”.  Fun Fact, one of the turtles is actually named Bubble Butt.  Bubble butt happens when a boat hits the turtle.  Air gets trapped under their shell from muscle and nerve damage causing them to float to the top.  The rehab workers put weights on the turtle’s back when they have bubble butt so that they can still dive.

All of this was taken out of one turtle’s intestines. It did not survive. 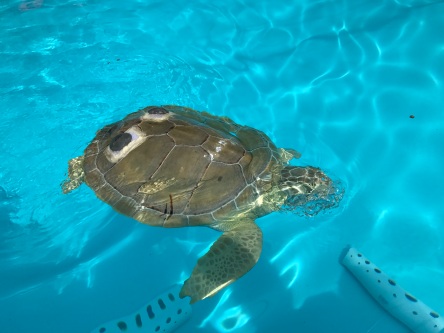 Weights on the back of the turtle.

If a piece of fishing line falls in the water off a boat it will take up to 600 years to break down.  It gets smaller every year.  Turtles have pretty good vision under water but it’s not the best above water.  Turtles can swim up to 30 mph but they usually just laze around.  Mayonnaise is used to clean off an oil spill.  There is a special kind of net that lets a fish in and can’t get out but the turtles can come in and get back out of the net.

I had fun in Marathon.  We are now in Islamorada.  AnnaMay and Ella got to come with us yesterday on the boat and we got to swim and hang out with them for the whole entire day.  Then we had to say goodbye to them. Boo hoo. 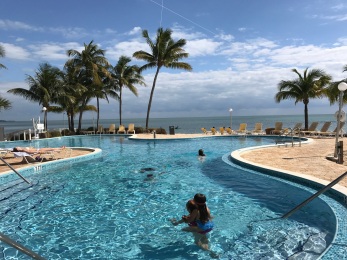 We walked to the turtle hospital.  We learned they need sunscreen too.

Next I learned there are 61 turtles at the turtle hospital.  Leatherback turtles can dive down 4,000 feet.  If a boat hits them part of their shell can break off and it won’t grow back.  Also, if they get hit by a boat they can get something called a bubble butt where their bottom floats to the top.  They can also get these things that bubble up and they are called pink tumors.  There are seven types of turtles in the world, one of them are green turtles and another is leatherback.  Green turtles can stay underwater for up to five hours.  I loved the turtle hospital.

Coming up for air

Weight on his back

We went to our friends boat.  Their names are Gabi and John.  We went there to go on a boat parade with them.  They had Christmas lights on their boat.  They also had Santa Claus!  We yelled Merry Christmas! to the people.  I was happy and excited. 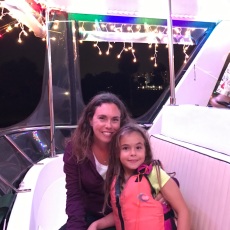 We went to our friends John and Gabi’s boat so we could ride with them in the light parade.  They had some other friends too.  They had lights all over the their boat. There were a lot in the front.  Also there was a Santa Claus on the top of the boat and a tree where their dinghy usually is. Maddy and I sat in the front of the boat on bean bag chairs. 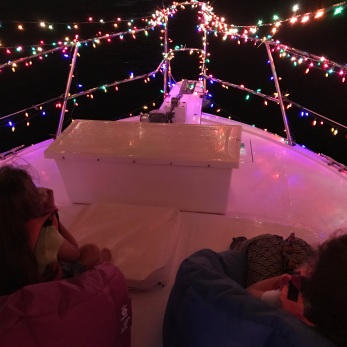 We left their marina and went to where the parade was.  We screamed Merry Christmas to everyone.  We also listened to Christmas music and danced on the front of the boat.  Then Maddy and I got tired so we went inside and played on iPads.  I went back outside when we went past the last judge stand.

They won 1st place in the large power boat category.  A different boat named Caddyshack won first place from the mayor.  I had so much fun! 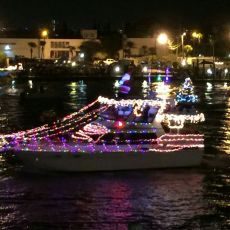 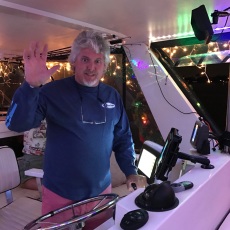 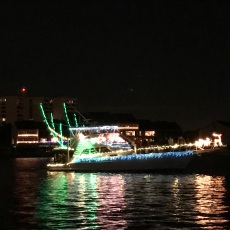 Today my cousins came  and grandpa. we went through two different locks . my grandpa had to put down the antennas. We went under a 19 foot railroad bridge that we just barley fit under with the antennas down. when we went under there was a train crossing over .We  saw a lot of barges along the river.Then we got to Juliet and docked .my grandma got on the boat we ate dinner and went to the park .then we got back on the boat and my cousins and grandparents left . Then we saw a big barge went under the bridge and right next to us .It was the first moving barge i had seen that day .there is one boat that we dont know for sure is a great looper but all the others are.