We drove to Clearwater Marine Aquarium. We got our wrist bands, and our picture taken. First we saw a turtle in surgery. Then we got to go see Winter and Hope. We saw Hope first, Winter had been in a training. Hope was waiting at the door whistling loudly. The next dolphin we saw was named Nicholas.  He was rescued on Christmas eve with his mother Noelle.  His mom died just a couple of days later.  Nicholas had sunburns on his back.  Now they are white scars.  We got to see him do tricks.  I learned a couple of things about him.  He eats 17 pounds of fish a day.  Also, he played Mandy in Dolphin Tale 2.

Then we went back inside to where Winter and Hope were.  We got to see fish and also otters.  The otters sort of reminded me of rats.  We saw five turtles.  Their names were Stubby, Titus, Madam, Bailey and Cocoa.  Bailey had her back flippers paralyzed.  Cocoa got hit by a boat propeller and is now blind.  We watched Cocoa get fed her lunch.  Then we went back outside to where Nicholas is and did dolphin anatomy.

Then we went back inside and watched Hope do tricks.  Hope got splashed in the face with a water gun.  She swam on her back and jumped fully out of the water. 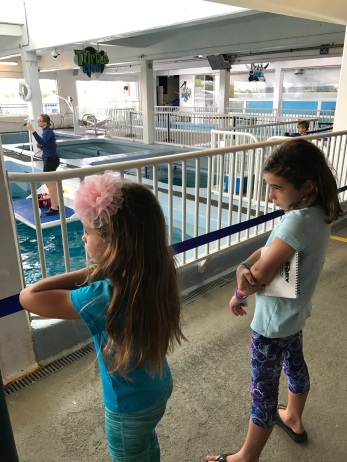 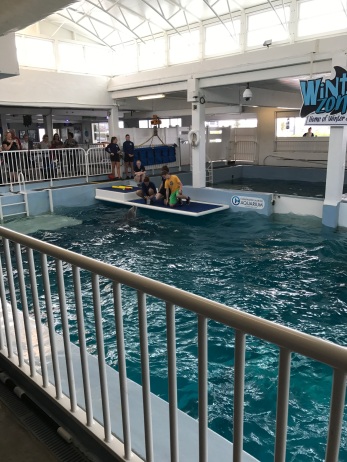 We got to see the place where Hazel sat and cried in Dolphin Tale 1.  We tried to touch stingrays but they were too fast.  We touched a sea urchin.   They were pokey and picked up shells with little suction cups on the end of their pokers.  And they have no minds.  Then we saw two funky sharks.  We also got to see Winter and Hope through the underwater windows.  It was super cool to see them through the underwater window because you could see the tails better and see where Winter’s tail fell off.  Next we went to the gift shop.  Maddy and I each got magnets, I got a shirt and Maddy got a play set.  We also got a sticker for the cooler.

After the aquarium we left and got lunch.  Last we went to see a building called Winter’s Dolphin Tale Adventure.  We got to see the fishing pole and chair that the man that noticed Winter was using also some of Hazel’s outfits.  We saw part of the houseboat from the movie.  We also got to see an animatronic dolphin and parts of fake dolphins.  They had some of Dr. McCarthy’s designs from the movie.  We got to see all of the actors and actresses chairs from when they filmed the movie.

Finally here are a couple of things I learned.

I had a lot of fun.  It was so cool learning about why all the different animals are there.  I loved it.