We visited the Ernest Hemingway House yesterday.  We jotted down some facts that we learned but Madelyn (and Molly) were most interested in the cats!

First we got our tickets.  Then a cat walked up to us.  Next we went into the house.  We saw a typewriter and his fishing pole and a model of his lighthouse.  We went upstairs and saw his bed.  He put two twin beds together and put a gate from a church as the headboard.  We got to give a cat treats on the bed. Then we went into another room and saw another cat.  There are 53 cats.  Half of them have 6 toes.  His first cat’s name was Snow White.  The cats are really soft.  He wrote every day for 6 hours.  He wrote 500 to 700 words a day.  He had four wives. 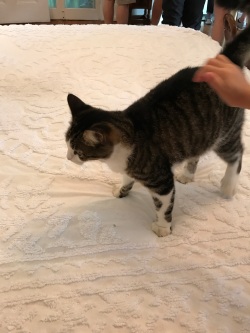 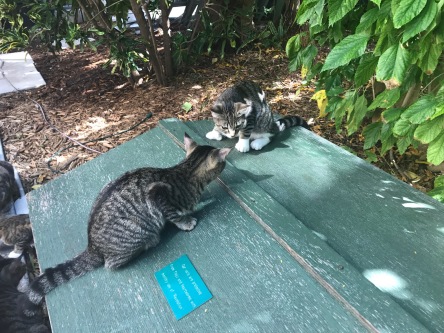 Today I learned some things.  The first thing I learned was that Ernest Hemingway was a large man.  He made a king sized bed.  He put together two day beds.  Then when he went to Spain he got a church gate for the headboard.  The next thing I learned was he was a writer.  He wrote from 6 am til noon every day.  He wrote 500-700 words every day.  Then I learned that there are 53 cats there.  About half of them have 6 toes.  One of the cats bit me when I was petting him.  His first cat was named Snow White.  The last thing I learned was that when he installed his pool there was no running water so they dug a path from the pool to the ocean and put a pipe so the ocean water would just flow through and into the pool.  His first wife had the pool built.  He had four wives.  I really enjoyed the Hemingway House. 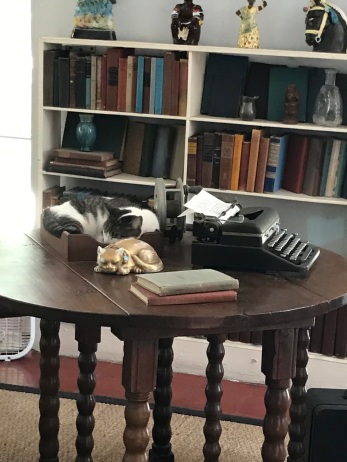 Kitty curled up on Hemingway’s writing desk in his studio 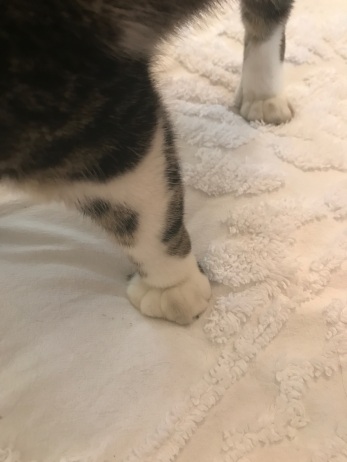